Ayodeji Ogunnaike on the Dynamic Spread of Geomancy in Africa 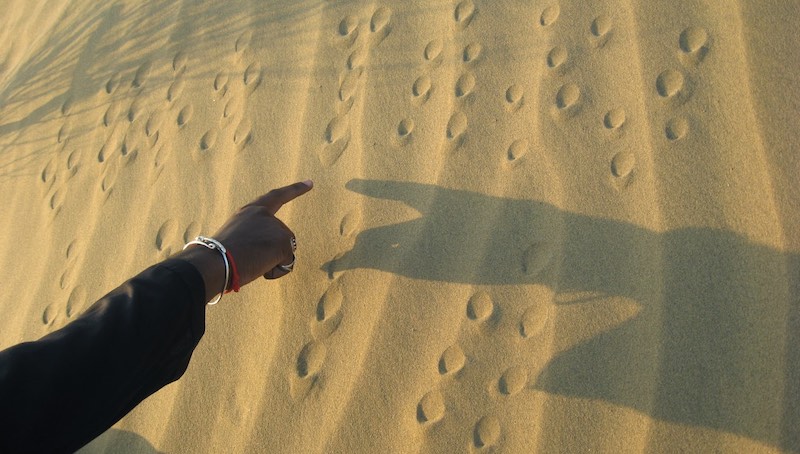 Although Africa has traditionally not been at the center of scholarly discourse on the tradition of geomancy, it has perhaps the most complex, diverse, and fascinating history of engagement with the tradition and may be more central to its development and diffusion than is generally recognized by scholars and practitioners alike. To begin, while there is a fairly unified tradition of geomancy in the Middle East, North Africa, and Europe it is also quite pervasive all over the African continent, particularly wherever there is a significant Muslim population. However, there is also a remarkable number of other divination traditions in practically every country in Africa that are either adaptations of Islamic geomancy specifically or have been heavily influenced by and appropriated aspects of it. Some of these traditions have then gone on to influence other indigenous African divination systems, some of which have had complex exchanges with Islamic geomancy in their societies as well, creating a bewildering plurality of traditions and remarkable web of linked traditions whose historical and religious influences on each other are consequently quite difficult to untangle. At times one society may have multiple traditions of geomancy or indigenous forms of divination that are influenced by it, and individual people may have expertise in and practice multiple forms simultaneously, making Africa perhaps the home of the greatest concentration of and diversity within geomancy traditions in the world. 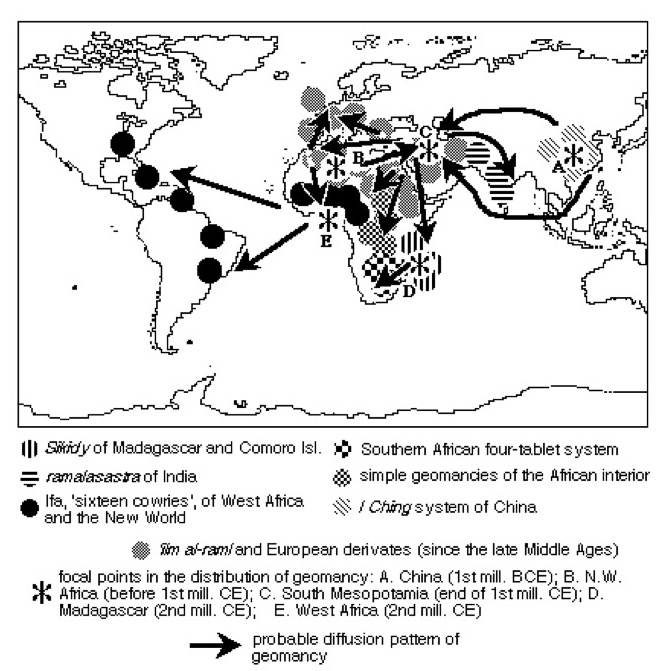 At the same time, scholars often overlook the strong influence of Islamic geomancy in indigenous African traditions or conversely might overstate it when it is identified. The common assumption of African societies’ isolation from the outside world and the passive, unidirectional influence of Islamic traditions contributes to this difficulty. Some divination traditions may appear to have little in common with geomancy at all even when they are deeply intertwined. Given the incredible amount of diversity in the first step of a process of random generation, using materials as divergent as chains, kernels, nuts, shells, tablets, and stones, the underlying system of symbolism and organizing narratives are often taken directly from Islamic geomancy, as is the case with the Southern African divination system called Hakata.1 Many other systems may use the same tetragrams of geomancy (such as Ifa) but have a more limited influence from the tradition, while others (such as Hakata again) may not employ the tetragrams at all but have been influenced more heavily by geomancy, and in others (like Sikidy from Madagascar) the presence of the tetragrams is a flag for a deep reliance on Islamic geomancy.2 It is at the level of interpretation of divinatory messages that the level of interaction with Islamic traditions is most easily observable as the indigenous contexts, terms, interpretations, and narratives themselves always take on a strong local character, but influence from Arabic names, the zodiac, or even figures and narratives from the Qur’an and Sīra may be present. 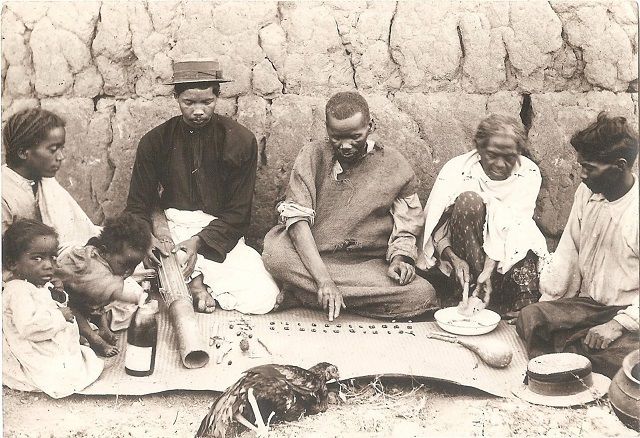 One fascinating theory that could explain why the African continent is such fertile ground for geomancy and geomancy-inspired traditions is that the dominant Islamic tradition of geomancy may in fact have deep roots in Africa. Al-Zanātī, author of Kitāb fī usūl ‘ilm al-raml, one of the earliest and foundational sources on Islamic geomancy, was quite likely a Zanata Berber as his name suggests, and some of the earliest names for the 16 figures and houses appear to have Berber linguistic origins. Furthermore, there is a high level of diversity in the number of terms used in and forms of geomancy in the traditionally Berber region of northwestern Africa, all of which suggests that the tradition codified in centers of the Abbasid world may have drawn heavily on proto-geomancy traditions emerging from this area.3 Regardless of specific geographical origins, a remarkable number of societies across the African continent (including the Yoruba and their tradition of Ifa) employ binary, recursive mathematical systems: precisely the two features at the heart of the geomancy process.4 In this sense, the system of geomancy would have been immediately intelligible to indigenous intellectuals and ritual specialists either because they were already working with similar geomancy traditions or already practiced traditions that could easily incorporate aspects of geomancy. 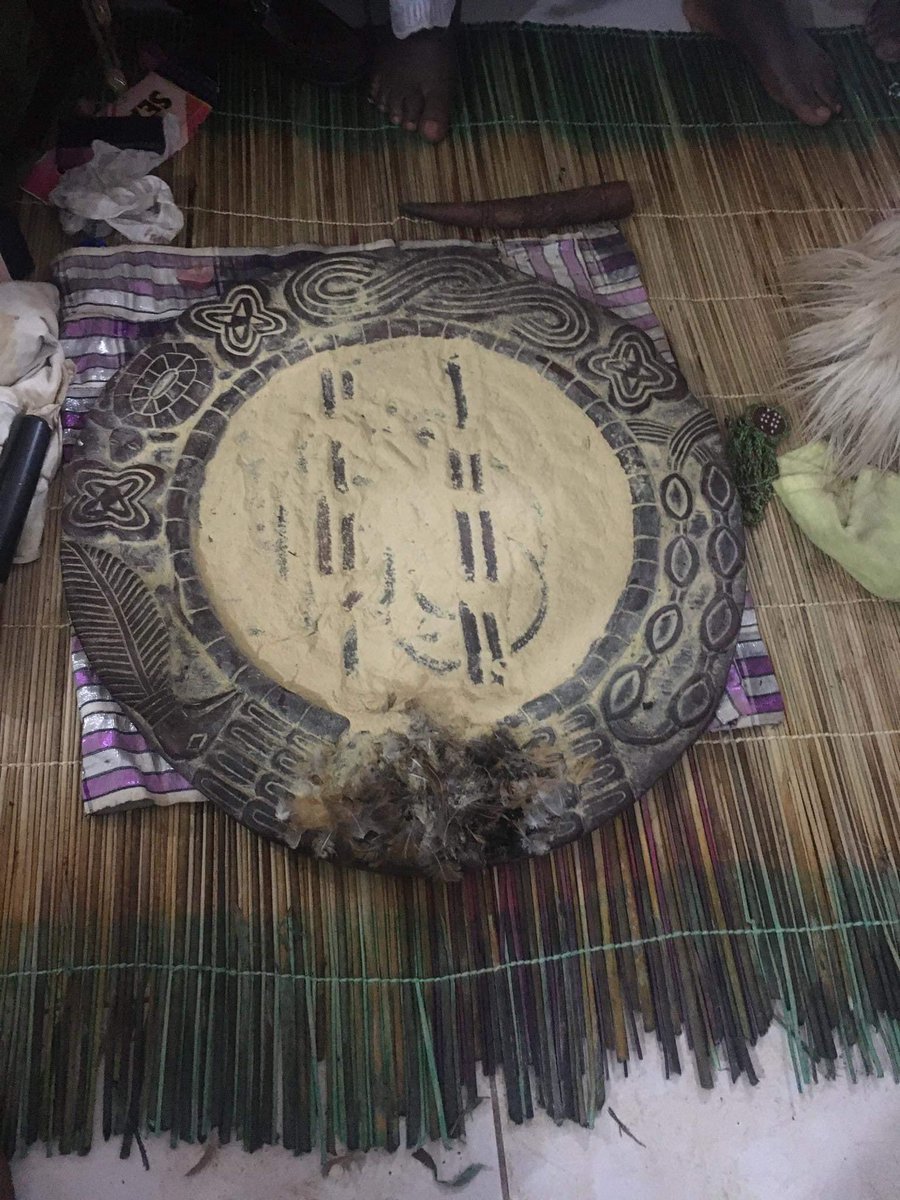 The latter is the most likely case with Ifa divination. Although some assume it is an indigenized version of Islamic geomancy (called iyanrin in Yoruba), 5 the Yoruba most likely appropriated the highly useful structure and symbols/figures from geomancy and grafted them onto a preexisting divinatory tradition. Much like a memory palace, the symbols and base-16 process of organizing their various permutations allows for remarkably rapid mental storage and recall of vast amounts of information, which would be highly useful for a predominantly oral society like the Yoruba. Ifa also has a long history of domesticating aspects of foreign traditions on its own terms, recasting sacred literature and narratives, songs, rituals, and even praise names of other deities in a manner that reflects its particular worldview.6 The appropriation of geomancy’s tetragrams could also explain why there are two primary methods of performing Ifa divination. The method accepted to be older and more authoritative involves grasping 16 palm kernels (ikin) in the diviner’s hand until the number of kernels left reveals a particular message, and the less authoritative, junior method involves casting a chain (ọpẹlẹ) with four half shells on each side whose configuration maps perfectly onto the tetragrams used in geomancy that also represent the Odu (chapters) of the sacred oral corpus of Ifa. Divination with the ikin takes much longer, and Ifa priests posit that the ọpẹlẹ was invented as a way of speeding up the process. If the organizing structure of Islamic geomancy were in fact adopted by the tradition of Ifa, then the ọpẹlẹ would be an ingenious, but natural, technological innovation to streamline the process that capitalizes on an opportunity that would not have existed previously.

Grafting the organizational structure and symbols of Islamic geomancy would have been quite natural in the case of Ifa as it and all Yoruba forms of divination operate on a binary system of positive and negative responses, and the sacrality of the number 16 is embedded in them all. As Ifa is widely accepted as the most authoritative and senior method of divination, this may not always have been the case,7 and the potential enhancement of the tradition with elements of Islamic geomancy may have contributed to its pre-eminent status in Yoruba divination and society in general. In short, a type of “constructive interference” may have been at play all over Africa in which the tradition of geomancy could be seamlessly integrated into indigenous traditions, making them more powerful or efficient, rather than African societies passively assimilating a degraded form of Islamic geomancy.

Consequently, the African continent is likely home to, or the source of, the greatest degree of diversity and dynamism within the global practice of geomancy traditions. In addition to the practice of Islamic geomancy being found from Cairo to Cape Town, this form of geomancy has heavily influenced indigenous divination systems all over the continent in various ways and to different degrees. Some indigenous forms of divination like Ifa have even influenced the local practice of Islamic geomancy, creating a bewildering web of interactions and mutual influence. The ubiquitous nature of the board game often called mancala in the West might also be related to African societies’ receptivity to geomancy. In addition, the various traditions associated with Islamic geomancy share a great deal of procedural and structural similarities to the various forms of the game commonly called mancala in the West, and they even seem to have spread along the same trade routes in Africa and be associated with similar ritual and cultural practices.8 Finally, the earliest practice of geomancy in the Americas almost certainly has its roots in Africa as well. Not only did enslaved Africans bring the Yoruba tradition of Ifa to places like Brazil and Cuba, the considerable number of Muslims in their number are also documented as having brought Islamic geomancy to the Americas and practiced it professionally as well!9 Although one might need to perform divination to determine precisely where the practice of geomancy began, it is perhaps more at home and has deeper resonance in Africa and amongst its people than anywhere else in the world. 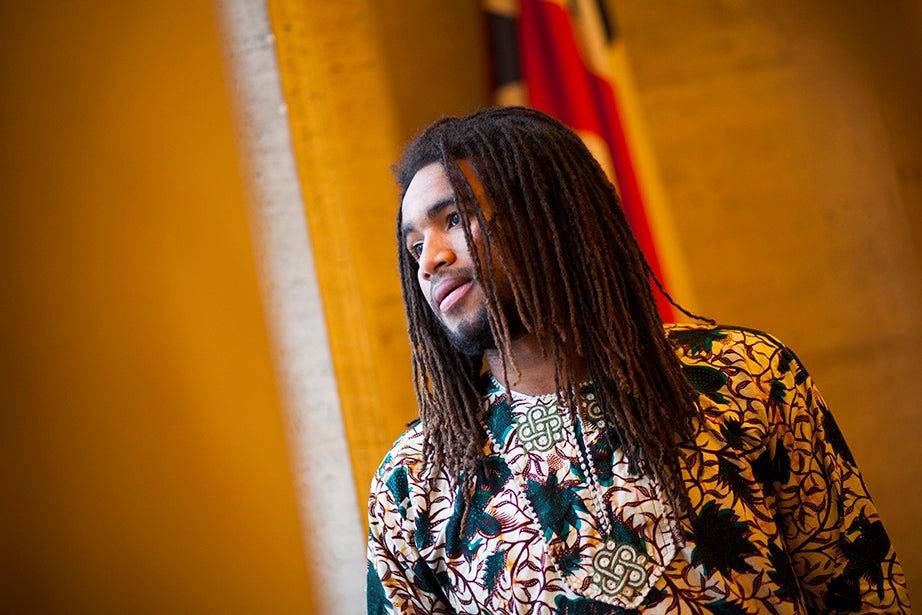 Ayodeji Ogunnaike’s research focusses mostly on Yoruba oriṣa worship in Nigeria, but also addresses Islam in Africa, Christianity in Africa, and diaspora religions—Brazilian Candomblé in particular. Having studied Ifa divination with a high priest and diviner in Nigeria, he has a keen interest in indigenous African intellectual traditions and ways of knowing. His current book project, How Worship Becomes Religion, analyzes how the worship of traditional Yoruba deities originally differed greatly from Western notions of “religion” but eventually became the most widespread and celebrated indigenous African religion through contact with modernity and mission Christianity. He is also currently working on a children’s book of Yoruba mythology with his brothers Oludamini and Olumakinde and has been developing and curating an online library of Ifa orature.