Samantha Pellegrino on Historiography and New Directions in Jābirian Studies 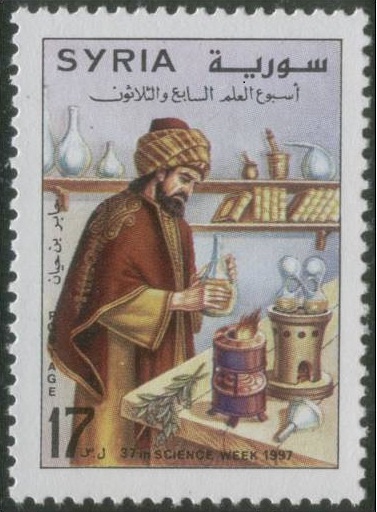 The Jābirian corpus is the most extensive Arabic collection of alchemical works, attributed to the enigmatic practitioner Jābir ibn Ḥayyān (d. c.200/815?), though it contains a vast number of talismanic, astrological, pharmacological, philosophical, and occult treatises as well. This corpus is also the most influential series of texts within the Islamic alchemical tradition.1 Thus Jābirian ideas are cited throughout later alchemical writings, appearing in works by the most notable alchemists of medieval and early modern Islamic history, including, but not limited to, al-Ṭughrā’ī (d. 515/1121), Ibn Arfaʿ Ra’s (fl. sixth/twelfth century), al-ʿIrāqī (fl. seventh/thirteenth century), al-Jildakī (fl. mid-eighth/fourteenth century), and the early modern Ottoman ʿAli Çelebi corpus (tentative dates range from the 15th to early 17th centuries).2 Furthermore, key medieval Islamic occult scientific concepts, such as the ‘science of letters’ (ʿilm al-ḥurūf), as figured in the Jābirian corpus, proved highly influential to esoteric discourses surrounding letter speculation in medieval Islamic mystical, philosophical, and cosmological thinking.3

However, despite the breadth of its influence and the early-mid 20th century flurry of work on alchemical texts and figures,4 the Jābirian corpus and Islamic alchemy more broadly remain understudied and undertheorized. In comparison with the reinvigorated contemporary pursuit of academic studies of Islamic occult sciences, there is a dearth of scholarly work on Islamic alchemy and on texts typically classified as alchemical.5 Jābirian alchemy is the best and most studied aspect of the Islamic alchemical tradition; yet if we were to delineate a field of Jābirian studies, it would be defined not by translations of Jābirian manuscripts or studies of the corpus’ contents, but instead by a powerful emphasis on historical contextualization and controversial aspects of the “Jābir problem.” Scholars have been unable to conclusively determine the existence of a historical Jābir ibn Ḥayyān, determine whether a single author (who may or may not be the historical Jābir) or a collection of authors wrote the Jābirian corpus, or provide conclusive dating of the individual treatises or corpus on whole. It is likely due to the coupled complexity of Jābirian historicity and its prized place within the field that academic studies of the Jābirian corpus have become fewer and farther between, even while the majority of Jābirian writings remain untranslated, unedited, or unstudied 6.

Traditionally, Jābir has been considered a student of the imām Jaʿfar al-Ṣādiq (d. 148/765), living between c. 107/725 and c. 193/812. However, his precise historical provenance has been the subject of debate as far back as Ibn al-Nadīm’s tenth century Fihrist, which mentions some collective skepticism around the existence of a single alchemist Jābir ibn Ḥayyān, though Ibn al-Nadīm himself believes Jābir to have existed.7 Jābir was also identified with the Latin (Pseudo-)Geber, author of the Summa perfectionis magisterii (The Height of the Perfection of Mastery), on the basis of 14th Latin manuscripts borrowing the name and subsequent scholarship. Studies on Jābir, primarily by Marcellin Berthelot, Julius Ruska, E. J. Holmyard, and H. E. Stapleton, from the beginning and middle of the 20th century served to complicate and contest this traditional narrative.

The most notable complication of the traditional account, however, comes from the work of Paul Kraus. Kraus’ seminal volumes, Le corpus de ecrits Jābiriens and Jābir ibn Ḥayyān, Contribution à l’histoire des idées scientifiques dans l’Islam, are the exemplar of Jābirian historigraphy, though his article “Dschābir Ibn Ḥajjān Und Die Ismāʿīlijja” is perhaps as important with regards to establishing a paradigm for methods of Jābirian study. Published in the late 1930s and early 1940s, Kraus’ works contain an extensive manuscript catalogue and index, translated excerpts of important texts, and studies on alchemy, the science of properties, artificial generation, cosmology, the theory of Balance, and Greek influences in the Jābirian corpus. Kraus argued for the dating of the corpus in the late ninth and early tenth centuries, rather than the eighth, against the traditional account as well as for a plural authorship of the corpus and an Ismāʿīlī provenance, due to the vastness of the corpus, the presence of what he identified as Ismāʿīlī thought and ideas, and the cosmology based on Greek philosophy translated into Arabic only after the eighth century.8

In response to Kraus’ thesis about dating and historicity, two schools of Jābirian studies developed and crystallized over the course of the 20th century. First, there is the school that maintains and defends the traditional account. This school is championed by Fuat Sezgin and S. N. Haq. Sezgin argued in the fourth volume of his Geschichte des Arabischen Schrifttums (1967) for a single author and early composition of the corpus. Sezgin felt in particular that Kraus underestimated the degree of circulation of Greek philosophy in the Arab world prior to the translation movement of the caliph al-Ma’mūn and overstated the Ismaʿīlī influence in the corpus. In 1994, Haq published Names, Natures, and Things, on the Jābirian Kitāb al-Aḥjār (Book of Stones), arguing also for an early and single Jābir on the basis of what he sees as an overstatement of the size of the corpus and the presence of archaic translations of Greek texts within the Jābirian corpus that could make an early dating possible.

Second, there is the school following Kraus. Within this school there exists a fair amount of variation of opinion; it is also the generally dominant approach to Jābirian writings and the one most regularly cited by scholars of medieval alchemy outside of Islamic studies generally or Jābirian studies specifically. The thrust of its argumentation follows from Kraus directly, demanding a reconsideration of the traditional account’s dating and authorship. Included in this is usually a designation of Jābirian writings as Ismāʿīlī or Ismāʿīlī-inflected. Representatives include Martin Plessner, Peter Zirnis, Manfred Ullmann, Donald R. Hill, and Kathleen Malone O’Connor.9

A third school of Jābirian studies grew out of a different intellectual tradition, emerging not from the “Jābir problem” but instead out of a particular branch of studies of Islamic esotericism and Sufism, defined by the legacy of the Traditionalists and the Jungians. This school includes figures such as Henry Corbin and Titus Burckthart, whose methods have included overlaying universalist ideas and a concept of sacred history onto medieval ideas. As Liana Saif writes, “Guénon and Schuon thus cemented a Traditionalist and perennialist view of Sufism under the term ‘Islamic esotericism.’ This view has become influential to such a degree that many non-Traditionalist scholars who became key authorities on Islamic esotericism and ‘spirituality’ wrote in similar terms. This is especially true of Henry Corbin, who is often described as a Traditionalist, despite his rejection of it.”10 Corbin’s student, Pierre Lory, a very prolific scholar of Jābirian alchemy, holds a unique position amidst this discussion of schools: while deeply invested in the interpretation of alchemy as a spiritual enterprise, Lory also offers a highly sophisticated take on the “Jābir problem”, arguing for a historical Jābir as well as a reworking and continual development of the corpus over time.

That these are the general contours of the field of Jābirian studies presents a series of considerations for future studies of Jābirian materials. First, the controversy Kraus incited around dating, authorship, and historical provenance has become the de-facto starting (and often stopping) point for studies of Jābirian writings. That historicity is a question addressed and interrogated in Jābirian studies is good; that it is the sole or dominant line of inquiry into Jābirian materials, perhaps not. Second, and relatedly, Kraus’ theories on dating and authorship, prioritization of Greek influence within Jābirian writings, dismissal of the corpus’ esotericism, and insistence on the relationship between Jābirian esotericism and Ismāʿīlism are positions still conceptually and methodologically held by scholars of Jābirian writings and Islamic alchemy, despite a number of notable critiques and discoveries (namely in the works of Sezgin and Haq). In overdeveloping a focus on dating and authorship, studies of Jābirian writings have collectively neglected a genuine engagement with the content of the corpus: at worst, historical context has been assumed to exhaust meaning. This can lead to a neglect of attention to texts themselves, effectively silencing the texts’ own theorizations and contextualization in favor of those of scholars.

Third, the methods engaged by all schools still often spring from colonial roots. Kraus, for example, reads the cocktail of cosmology, philosophy, and science in the Jābirian corpus as slightly altered Greek thought; he also excises the occult elements found in the corpus from his work, leaning heavily on the category of Ismāʿīlism as a means of explanation instead. This is not to say that Jābirian texts do not build upon large foundations of Greek thought, but Arabic and Islamic occult texts are not simply vehicles for the preservation of Greek knowledge, either. The detailed way in which we talk about the knowledge shared across late-antique and early medieval alchemical traditions matters, and I laud those who continue to develop the intellectual and linguistic resources to do so with accuracy and nuance. Nor are Jābirian texts exclusively not of Ismāʿīlī provenance; rather their religiosity needs to be capaciously and carefully reconsidered in light of contemporary theorizations of the occult sciences in the medieval Islamicate world and developments in the field of Ismāʿīlī studies.11 Furthermore, much of the work done following Kraus either harnesses Greek material to challenge Kraus’ theorizations–and thus keeps the conversation about Jābir centered on Greek material–or continues Kraus’ line of Jābirian inquiry, diving into texts primarily on the basis of their relationship to Greek philosophy. Again, that this is an avenue of Jābirian exploration is good; that it is sole or dominant, less so.

The ossification of the field around matters of dating and authorship presents an additional problem: assumptions and interpretations of the content of Jābirian writings made by scholars up to a century ago have become naturalized. One example of this is the understanding of the alchemist as one who seeks to imitate God through the alchemical generation of new life. Many presuppositions about the meanings and locations of imitation, artifice, naturalness, and divinity are encased within this idea. However, a stable sense of the meanings attached to these aforementioned concepts–which structure the alchemical generation of life–has never been developed.

The question that remains, then, is how will scholars of medieval Islamic alchemy, and Jābirian writings in particular, continue to develop their methodological sensibilities and practices? I myself am interested in continuing to problematize this focus on historical contextualization that I see as definitional to Jābirian studies, and in arguing that questions of context should not take priority over explorations of content, including the production of edited texts and translations. I view the prioritization of historicity as often counterproductive: while context is valuable in interpretation, knowledge of content is often what enables the establishment of context. I therefore encourage scholars of Jābirian writings to de-center the traditional methods of dating and historiography in favor of new directions, and advocate myself for more literary, deconstructionist, and interdisciplinary approaches.

Samantha Pellegrino is a PhD candidate in Islamic Studies at the University of Chicago. Her research interests include the Jābirian corpus, the history and historiography of Islamic alchemy, ectogenesis, and imaginations of gender (in both medieval Islamic alchemical texts and also in medieval Islamicate literature as it is mediated through the categories of the occult, the supernatural, and the magical). Her dissertation explores how the artificial is theorized in Jābirian texts, particularly in relation to the divine, and engages new methodological tools to de-center historicity as the primary metric by which Jābirian writings are engaged. More information can be found at her website.