Side Emre on Diagramming in 16th Century Ottoman Sufi Literature 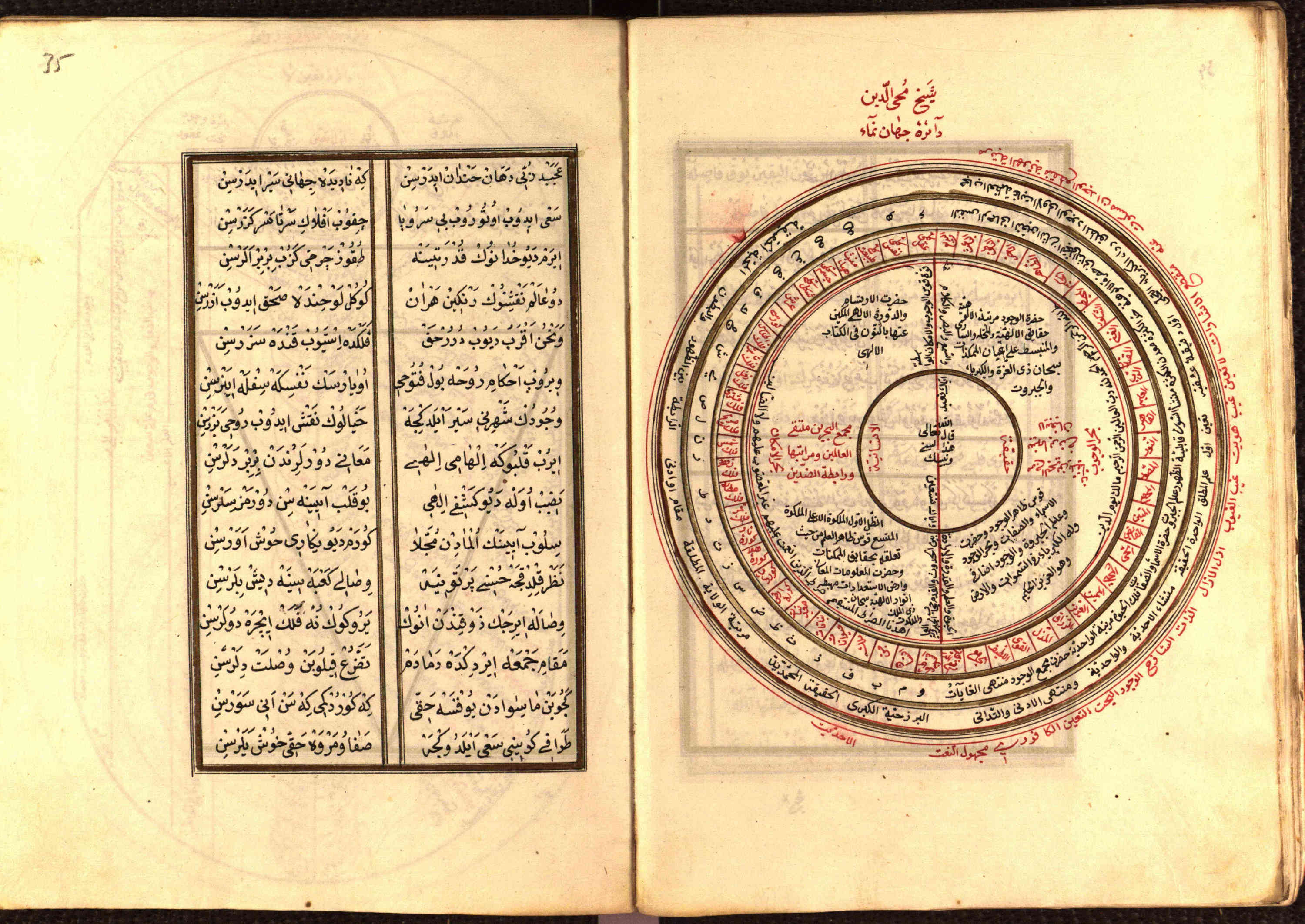 The Dāʾire-i Cihānnümā (composed between 1504 and 1516 C.E.) is an extraordinary Sufi treatise written by Muḥyī (d. ca. 1530), an unknown Khalwati, possibly of the Sunbuli-Cemali branch, who lived in Ottoman Rumelia. Inspired by Ibn al-ʿArabī’s Kitāb al-Tadjalliyāt, the Futūhāt al-Makkiyya and, most visibly, the Inshā’ al-dawā’ir, Muḥyī drew on a vast heritage of medieval Islamicate mystical literature and esoteric subject-matter to investigate and, expand on, visualized cosmologies that can be described in connection with, and visibly distinct from, known Akbarian cosmologies.

Akbarian cosmologies do not have a scientific/astronomical orientation. They cannot be grasped with empirical investigation since they represent a continuous state of change and development, eluding a finite “objective” phenomenon or an end product that can be categorized in “scientific” parlance.1 Al-ʿArabī’s study of cosmology, as in the governance and study of the universe, is linked to one’s self-knowledge and relies on the nafs (self or soul) “becoming”.2 While there is a constant sense of flux in Akbarian cosmology, there is a consistent spiritual hierarchy connecting different levels of being such as the divine essence, hāhūt; divine nature, lāhūt; spiritual existence, jabarūt; the world of similitude, ʿālam al-mithal; angelic world, malakūt and a plane for humanity, nāsūt, with human representatives of the Divine such as the perfect man (insān al-kāmil), friends of God, the pole, substitutes, and supports.3 This understanding was adopted by al-ʿArabī’s followers, and commentators, to be advanced in their works in the Islamicate cultural world. We see different forms of cosmological hierarchy and structuring in works inspired by the Akbarian legacy in the 16th century Ottoman context and, in that framework, Muḥyī’s Dāʾire-i Cihānnümā is one of the most significant representatives of this heritage. However, the unexpected punch line in the Dāʾire-i Cihānnümā is not a theoretical or philosophical discussion of “cosmology” but instead a number of beautifully hand-drawn circular diagrams that dominate, and complement, the written text. Diagrams, tables, charts, or other visual materials, such as doodles in margins, were not considered strange, or out of place, in the medieval and early modern Islamicate mystical/esoteric literature. It is, however, somewhat of an oddity for scholars of “Ottoman” Sufism and for those who may not be familiar with al-ʿArabī’s fondness of diagrams and tables. In fact, in a number of al-ʿArabī’s works, including the Futūhāt al-Makkiyya and the Inshā’ al-dawā’ir, there are discussions of how circles are the perfect geometric form and how circular diagrams serve to enrich the texts and help readers visualize the intricacies of the textual subject-matter. 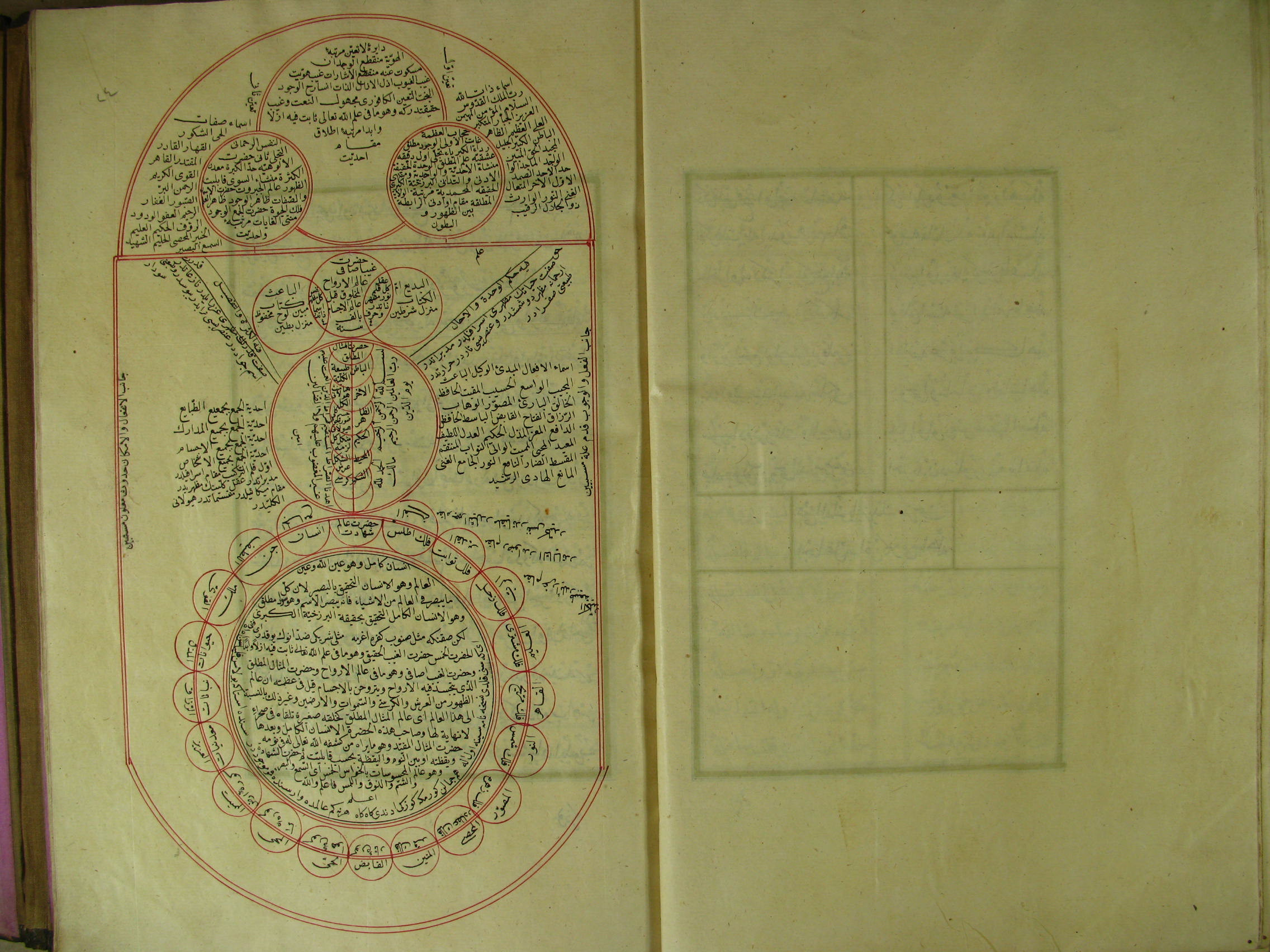 In the beginning of the Inshā’ al-dawā’ir, the reader is instantaneously alerted to why al-ʿArabī’s drew diagrams: < I have drawn diagrams, established comparisons, and explained what is proper to man, as human being and as a religious and ethical being, in order to facilitate understanding and lead to knowledge.4 While being inspired by al-ʿArabī’s writings, in the Dāʾire-i Cihānnümā, Muḥyī does not provide a commentary, or a separate discussion of a personal motivation behind the production of diagrams. Instead, without delving in metaphysical analysis, Muḥyī explains the gist of his treatise: circular diagrams, such as the likes of which were drawn by his master Shaykh Bayezid, who was also inspired by Ibn al-ʿArabī, deal with spheres, and in particular, Celestial Spheres and also with a Ṣūfī’s mystical journey. These diagrams were included in the text as they were the key elements to facilitate learning about the twenty-eight stations (yirmisekiz mertebe) which pointed to twenty-eight thousand worlds (yirmisekiz bin alem), which in turn had been created from the sphere/world of initial existence/beginning (T.ʿālem-i bidāyetden, A. ʿālam al-bidāya) up to the sphere/world of final limit/end (T. ʿālem-i nihāyete, A. ʿālam al-nihāya). Thus, by disclosing one of the main reasons behind the composition of the Dāire-i Cihānnümā, Muḥyī says that this treatise, with its cosmographical and mystical/initiatory subject-matter, was extraordinary for its rich and complex diagrammatical material.

This is only a minimal glimpse of what the Dāire-i Cihānnümā offers us. In my larger monograph length project of diagrams in early modern Ottoman Sufi literature, I study this work, alongside others, as “mystical cosmologies” organized and structured as new and composite types of visual and textual archives—archives of knowledge that sought to comprehend the cosmos, God, and man’s place in it through a uniquely formed Anatolian/Rumelian and possibly “Ottomanized” lens. The authors of mystical cosmologies adapted Persian and Arabic Akbarian teachings, among other inspirations, to the adab, traditions, and etiquette of their own tariqas, such as the Khalwatiyya and its offshoots, and wrote exclusively in Anatolian Turkish. In their quest to make complicated Akbarian concepts accessible to their readers, they also prioritized drawing diagrams to further prove their points, ignite the imaginations of their audiences, and introduce a whole array of topics/themes esoteric in the process. With an emphasis on the formation of new type of knowledge in one of the longest-living, diverse, and geographically extensive Islamic empires, Sufi authors, such as Muḥyī, became creative thinkers and illustrators behind an “Ottomanized” and Turkish cultural flowering in the sixteenth century—a phenomenon of which modern-day scholarship in Ottoman and Sufism Studies remain unaware.

Side Emre is an Associate Professor of Islamic and Middle Eastern History at Texas A&M University, History Department. She specializes in the late medieval and early modern history of the Ottoman Empire and Egypt. Her first book, Ibrahim-i Gulshani and the Khalwati-Gulshani Order: Power Brokers in Ottoman Egypt (Brill, 2017) received Ottoman Turkish Studies Association’s 2018 Fuad Koprulu Honorable Mention Book Award. In this book Emre examined the historical trajectory of the Khalwati-Gulshani order with their socio-political and cultural impact on the pre-modern Muslim world. She has a number of article length publications on the Gulshaniyya culture and literature, the influence of Ibn al-‘Arabi in Ottoman mystical literature and the political history of Egypt following the region’s Ottoman conquest in 1517. Her current research project and upcoming book is on diagramming and production of visual knowledge in texts produced by Sufis living in the Ottoman realms.