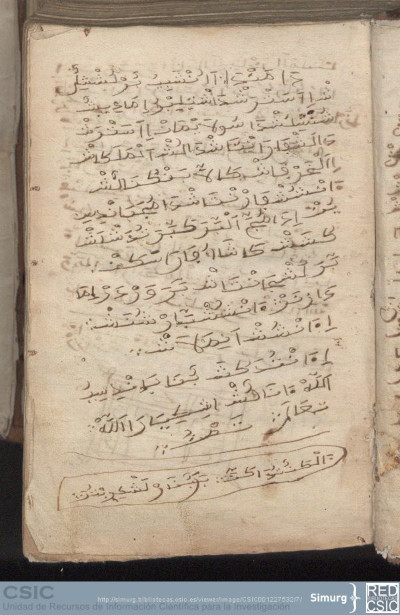 For this write up of my presentation on November 12, 2021 I am sharing a sneak-peak of a project I am working on. I am in the preliminary stages of co-editing a volume on premodern blended languages in Spanish-Speaking worlds and my chapter contribution focuses on the use of Hebrew in protective spells in a likely sixteenth-century hidden Morisco Aljamiado grimoire that is written entirely in Arabic script but mostly fluctuates between phonetic Spanish and Arabic with a sprinkling of other languages like Hebrew, Latin, Greek, Persian, as well as lunettes and sigils. During the presentation I shared two of my main six examples. For this post I share one.

A closer look at the mixed language use of a hidden 576 folio Aljamiado manuscript, Libro de dichos maravillosos [Book of Marvelous Sayings], on presumably licit magical solutions highlights the religiously fluid views of the Morisco compilers and readers. While the term Morisco applied to a variety of Iberian inhabitants prior to their expulsion beginning in 1609, I specifically mean those that were not as familiar with Arabic and clandestinely practiced Islamic rituals while outwardly presenting as New Christians.1 Like most surviving Aljamiado manuscripts, its folios, all represented in Arabic script, fluctuates mostly between Spanish and Arabic with no warning and often within the same sentence—and sometimes even mid-word applying Spanish grammar rules to Arabic terms. As I mentioned, I am focusing on the use of Hebrew throughout the codex. Every time Hebrew appears it is a variation of the phrase from the Torah “ehyeh ašer ehyeh ašer” [I am that I am]. Curiously, this phrase or its variations are used as part of the instructions or the protective talismans themselves—many of which suggest a collegiality among the monotheistic believers and require the assistance of or protection from jinn.2

I argue that the repeated presence of this phrase in this manuscript exclusively for Moriscos, in this case the subset of this group that were for the most part already fluid in their religious identity and practice, highlights further fluidity among the three major Abrahamic traditions. Drawing from this manuscript, while one religion is always prioritized—and indeed many Moriscos strived to remain faithful Muslims despite their outward conversion—they were still all siblings as it were with followers who can be considered fellow children of God. Familial bonds can create unity and networks across entities. As such, the use of this particular phrase reinforces its own message of what “being” is. As the phrase is about God’s self-declaration, it can be interpreted as suggesting existence itself. The presence of this phrase, particularly in its original Hebrew, thus helps erase divisions among believers through these shared God-sanctioned magical practices.3

The grimoire I focus on is one that was discovered among similar hidden manuscripts in a wall in Zaragoza’s Almonacid de la Sierra in 1884. The manuscript itself is catalogued as MS RESC 22 and housed in the CSIC (Consejo Superior de Investigaciones Cientificas) in Madrid and Ana Labarta has a Spanish translation and study available entitled Libro de dichos maravillosos misceláneo morisco de magia y adivincación. It is divided into three main sections, one on sayings, another on fortune telling, and the last on amulets—specifically titled: “libro de dichos maravillosos” “libro de suertes” and “libro de amuletos”.4 Considering its length, it is one of the most useful sources on Morisco magic with spells ranging from cures for bodily aches, invisibility, fortune-telling, and general protection against harm. It is a large codex mostly written in two hands with some sections suggesting up to six different Moriscos working together to compile this document.5 The size, style, and hidden resting location suggest that this codex was a source of reference for many Moriscos on matters that were most important to them—issues that go beyond any one religion but concern all humanity.

I do not wish to imply that Moriscos were seen as equals or that they saw no division themselves amongst their Iberian neighbors but rather that due to their blended nature, esoteric Morisco practices transcend one religion and thus unify the three most influential religions of the peninsula. As such, a closer look at the protection spells within this manuscript demonstrates a fraternity among believers providing a way to call upon or protect oneself or one’s children from both good and bad jinn. As descendants of Mudejares—Iberian Muslims living in Christian territory—Moriscos who were mostly forced to convert to Christianity faced discrimination despite officially belonging to the same religion as those in power. It is precisely due to this unique cross-religious position held by many Moriscos that the Moriscos who had access to this (and similar) grimoires were able to see the value beyond socio-religious divides throughout Iberia, including the still present remnants of Jewish influence even after the 1492 expulsion. Indeed, despite the wishes of the monarchy, expulsion did not mean all traces of Muslim or Jewish influence were also removed from the peninsula.

As such, despite being constantly persecuted for their practices—just as the Conversos were—by inquisitors searching for differences these Moriscos turned to talismans that were not only meant to protect them but in a way emphasized unity drawing not only on material from the Qur’an but also the Bible and the Torah. The point of these protective practices was to demonstrate how the line between believers could be erased through the will of God. Just as a child turns to their parents for protection, so too do believers turn to God and if the magic contained in this manuscript is God-sanctioned then Moriscos are thus in the unique position of reconciling their seemingly competing religious thoughts and practices. For instance, in the preliminary material to the entire manuscript the Morisco copyists start on folio br, mostly in Spanish, with a first person narration of how they got the contents and states that a sage confirmed that what is in this book, among other things, are seals of Solomon. Presumably within these seals are references to “ālmalekaeš” [angels].6 This term is curious as it takes the Arabic plural for angels, “ālmalekah”, and adds a Spanish plural ending of “es” suggestive that the copyists, while familiar with some Arabic were not completely fluent and created a Spano-Arabic blend in addition to their code-switching between languages throughout the passage.7 This entry continues on the same folio explaining that the seals here contained are meant to “wardar i medezinar” [protect and cure] people, animals, or their goods with the blessing of God.8

This leads me to my example. As the magic contained in this treatise is meant to be in alignment with God, naturally there are many references and direct quotes from religious texts. Many of these do come from the Qur’an but I am most interested in those that draw from the Torah.9 On folios 97v to 105v we have talisman for good fortune via the control of jinn. In short, according to the mostly Spanish instructions the practitioner needs to write a long invocation mostly in Arabic with a short Hebrew phrase. The opening lines ask for God’s blessing and asked the practitioner to establish themselves as someone who is recognized by celestial beings who, as indicated on folio 102r and 102v recite, in Hebrew: “ašer ehyeh adonai / tzebaot” [I am that I am, lord of the armies].10 This is followed, on folios 102v and 103r by a similar invocation in Arabic of Moses’s Torah, Jesus’s Gospel, David’s Psalms, and Muhammad’s Qur’an claiming that all of these important figures and writings are with them.11 In creating this talisman the Morisco practitioner is supported by the major figures of the three religions. It would appear that it is the combined support of Moses, Jesus, David, and Mohammad that the Morisco practitioner is able to succeed and thus be elevated. It is not only one, but the combination of them that is needed thus blurring the religious divides highlighting the fraternity among the three Abrahamic religions.

Having established his presumed credentials and invoking the help of various angels (this time spelled correctly “ālmalekah” ), the practitioner is then meant to state that they are among those who are able to speak with the angels who guard the sacred names of God. As this section is mostly in Arabic, either the Morisco copyists of this section knew Arabic or were copying from an Arabic source without necessarily knowing the meaning of each word. Furthermore, when the term “angels” was used before, it was done in combination of Spanish and Arabic which could suggest that the Morisco copyists roughly knew how to say “angels” in Arabic but forgot it was already pluralized and added an additional Spanish ending—something not done here given its more monolingual context. After the practitioner establishes their credibly they are meant to call out to jinn and demons asking them to answer the call and obey the forthcoming command. Here the Morisco practitioner establishes themselves as someone who has the ability to speak with celestial beings and understands the significance of the many names of God. The Hebrew phrase used here, like in the other examples, comes from God’s revelation in Exodus 3:14 when he declares “I am that I am”. It is a powerful moment of revelation and self-identification of God’s existence and it is its use in protective spells I find most interesting. In this grimoire alone, what made the spells and protections powerful was their diversity. I do not mean to imply that Moriscos looked to insure their talismans had elements of the three religions but rather that the source of the spell or enchantment was not limited to any religion. As long as what their amulet contained what was considered powerful or important, it was valued. This attitude could explain why many list various religious figures in sequence—one mention is good but more mentions are better.

Ultimately, the continued and repeated use of this particular Hebrew phrase and its variations circles back to the issue of self-identification and self-manifestation. In not translating this phrase and preserving the already fluid use of Arabic and Spanish, one can read a message of cross-religious unity. Regardless of whether Moriscos were genuine Christian converts or not, they for the most part were believers and as believers they elevated the power of God in relation to his various creations. Even if there is difference, there is a fraternity among humans as creations of God. Therefore, perhaps this reading of Moriscos linguistic variance helps us understand how through magic Moriscos were able to transcend traditionally fixed identity markers. Just as God declares he is existence itself or rather is the act of being in everything, Moriscos took that message to heart and when it came to protective magic, erase division among believers.

Veronica Menaldi is an assistant professor of Spanish in the Department of Modern Languages at the University of Mississippi. She received her PhD from the Department of Spanish and Portuguese Studies at the University of Minnesota in 2018. Her research focuses on premodern (medieval and early modern) Iberian literatures and cultures at times in relationship to the greater Mediterranean and across the Atlantic with an emphasis on magic, food, and multi-religious cultural contact. She is particularly interested in the relationship between Castilian and Andalusi or later Morisco communities. In her first book, Love Magic and Control in Premodern Iberian Literature (Routledge, July 2021) she focuses on love magic—manipulation of objects, celestial spheres, and demonic conjurings to facilitate sexual encounters—exploring how practitioners and victims of such magic are represented in major fictional works produced in Castile in conjunction with other cultures from the thirteenth to the seventeenth centuries. At the core of her investigations is the ability to see and explore cultural connections across time and space.