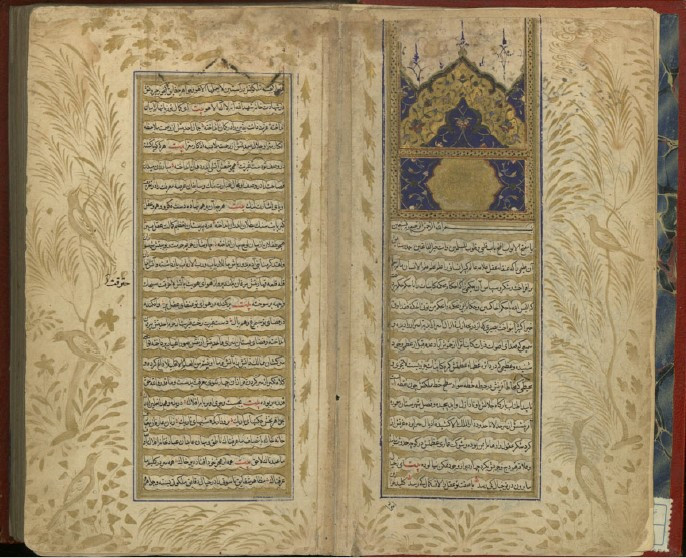 Scholarship on the Islamic occult in recent years has shown clearly that there was no shortage of intellectuals in the Islamic world in the post-Mongol era commenting on matters of the occult and the apocalyptic, often serving in high-profile positions from Anatolia to South India.1 The apparent ubiquity of occult discourse in the Islamic world at the time also suggests that this work is not yet complete, and additional avenues remain for understanding the folds of the occult sciences in the intellectual networks of the time. Take, for example, Ḥamza ibn ʿAlī Malik al-Ṭūsī al-Bayhaqī al-Isfarāyinī, known as Āẕarī (d. 866/1461-2), who served as a poet at Timurid and Bahmanid courts, and is not often thought of as connected to occult networks. Having become attached to the court of Tīmūr Bārlās at a young age as an attendant to Ulugh Beg, the son of Shāhrukh and grandson of Tīmūr, Āẕarī truly made a name for himself due to his poetic abilities at the court of Shāhrukh. Despite attaining a high position at the court in Herat, Āẕarī soon found the libertinism of this lifestyle alienating and he turned wholeheartedly towards the Ṣūfī path, studying under, first, Muḥyī al-Dīn al-Ṭūsī al-Ghazzālī (d. 830/1426-7), a shaykh in the Kubrawī spiritual lineage, and then Shāh Niʿmat Allāh (d. 834/1431). His time away from the court would be short-lived, as he was to be invited to Bīdar before long to serve at the court of Aḥmad Shāh I Bahmanī (r. 825-839/1422-1436), where he began composing a verse history of the sultanate titled the Bahman-nāma. Soon growing homesick, Āẕarī returned after a short stay in Bīdar to his homeland of Khurāsān, spending the rest of his life in Isfarāyin.2

This basic story of Āẕarī as a poet, Ṣūfī, and historian, though, is missing the fact that he was also the author of two occult compendia: the Miftāḥ al-Asrār, completed in 830/1426-7 shortly after his departure from the court of Shāhrukh, and the Javāhir al-Asrār, a revision and expansion of the Miftāḥ, in 840/1436-7.3 Though these works are of considerable breadth and must ideally be read in full to piece together the dispersion of concepts throughout, there are a few major points that can easily be extracted, and which place Āẕarī in good company with better-known occultists of the time. It is clear throughout the Miftāḥ and Javāhir both that Āẕarī held the science of the letters and divine names, the ʿilm-i ḥurūf va asmāʾ, in high regard, and that he was an admirer of the “people of unveiling and verification”, the ahl-i kashf va taḥqīq.

The work of Āẕarī reveals more than simply a passing interest in the intellectual discussion of the 9th/15th century over the ʿilm-i ḥurūf va asmāʾ, and on the contrary, lettrism is given an exalted role in his analysis as a method able to lay bare the secrets of the cosmos. This is on most obvious display in his interpretation of the Muqaṭṭaʿāt, the Disconnected Letters of the Qurʾān: for Āẕarī, not only the Muqaṭṭaʿāt, but each particular letter of the entire Arabic alphabet, may be linked with both one of the names of God and an element of the creation of the world. For example, the letter alif is associated with the divine name of al-mubdiʿ, “the Originator,” and the First Intellect, ʿaql-i awwal; the bāʾ aligns with al-bāʾith, “the Resurrector,” and the Universal Soul, nafs-i kulliya; and so on down the line, emanating letter by letter and stage by stage, to the creation of humanity.4 Therefore, for Āẕarī, the science of the letters and names allows one to read and understand both the Qurʾān and the “Book of Creation,” kitāb-i kāʾināt, for whatever is in the latter is held to be in the former.5 In other words, his approach to this science is in alignment with the “Two Books” theory which was itself en vogue among Neopythagorean-occult investigators of the same general time period.6

While this use of the science of the letters and the divine names as the key to “reading” the created world and the Qurʾān is not unusual by the standards of the time, Āẕarī also took the more provocative step of embracing certain elements in the thought of Fażl Allāh Astarābādī, the founder of the Ḥurūfiyya movement. Where other practitioners of the ʿilm-i ḥurūf condemned the radicalism of Fażl Allāh in the harshest terms, Āẕarī described Fażl Allāh with the honorific mawlānā, “our master,” and approvingly cited the Ḥurūfī works of the Jāvidān-nāma and ʿArsh-nāma to explore certain concepts in his occult investigations. The Miftāḥ faithfully transmits certain key Ḥurūfī concepts, such as the cosmic significance of the lines of the human face, as well as an understanding of the mahdī in which this messiah figure functions as the site of manifestation of the word (kalima) of ʿĪsā and a bearer of ʿīsawī secrets.7 On the one hand, Āẕarī was not exclusively Ḥurūfī in his intellectual positions, and his citations of Fażl Allāh are far fewer in number than those of the earlier esotericists Saʿd al-Dīn Ḥammūya or ʿAlāʾ al-Dawla Simnānī. Āẕarī’s approach was nothing if not encyclopedic, drawing from a wide variety of source material for his summary interpretations as he saw fit. However, on the other, the very presence of Ḥurūfī concepts presented in glowing terms is itself exceptional, placing Āẕarī as something of a minor node along a broader Ḥurūfī network in the 9th/15th century.

The People of Unveiling and Verification

The approach of Āẕarī to the ʿilm-i ḥurūf and the Ḥurūfiyya movement in even this short summary is evocative of certain trends taken up by 9th/15th century intellectuals in the Islamic world, but what more can be said about his particular school of thought? The ambiguous nature of the affiliations of Āẕarī was, in reality, a reflection of the highly fluid nature of confession and school which characterized the period as a whole. While Āẕarī was likely Shīʿī by birth, and his dīvān includes devotional poetry towards ʿAlī ibn Abī Ṭālib and the rest of the 12 imāms of the Ithnaʿasharī Shīʿa, his primary spiritual mentors were Sunnī, and his prose writing evinces little that could be considered normatively “Shīʿī.” By the same token, Āẕarī followed the fluid nature of Ṣūfī afflilation characteristic of the time in being affiliated with both the Kubrawiyya and Niʿmatallāhiyya networks. It is fitting that Āẕarī described himself in his Javāhir al-Asrār as being in the spiritual lineage of Saʿd al-Dīn Ḥammūya, who was himself a Sunnī with an affection for the Shīʿī imāms and an intense interest in lettrism.8 To put it simply, Āẕarī followed a path of “both/and,” not “either/or,” when it came to matters of confession and spiritual school.

That being said, there was one loosely-connected network to which Āẕarī had an explicit attraction, namely, the ahl-i kashf va taḥqīq, the “people of unveiling and verification.” This group, which would have included in its ranks such figures as the Timurid historian Sharaf al-Dīn ʿAlī Yazdī and the Bahmanid minister Maḥmūd Gāwān, took an intellectual approach which applied the science of the letters to resolve the unity of opposites, studied the astrological influence of the heavens upon the life of humanity, and explored the significance of the Disconnected Letters of the Qurʾān.9 While these same approaches are easily found throughout both of the esoteric compendia of Āẕarī, his interest in the ahl-i kashf va taḥqīq need not only be found by implication. On the contrary, Āẕarī stated as much himself: in a discussion of the well-known tradition that the Islamic community would split into 73 sects after the death of Muḥammad, 72 of which would deviate from the proper path, Āẕarī associated the one correct group with those who pursue unveiling and verification.10 While it can be difficult to strictly delineate a loosely-defined group such as the ahl-i kashf va taḥqīq, one could reasonably conclude that Āẕarī would have included himself in such a grouping.

While the writings of Āẕarī seem to operate on a more theoretical than practical level, his considerations of the Disconnected Letters, the mahdī, and a wide swath of other topics in his occult compendia should not be taken as mere musings. On the contrary, these exact topics – the relationship between mahdī-hood and political sovereignty, or the place of lettrism in the hierarchy of the sciences – were at the core of debates over the legitimate exercise of power across the Islamic world in the time of Āẕarī. Closely linked to Timurid courts from a young age, Āẕarī’s first “retirement” still involved him being invited to the court of Aḥmad Shāh in Bīdar, mentoring the crown prince and being showered in wealth.11 So too were his last forty years as a Ṣūfī contemplative in Isfarāyin interrupted to provide counsel on the question of justice (ʿadālat) to the Timurid Sulṭān-Muḥammad b. Bāysunghur.12 Given the fact that the prose work of Āẕarī reflected a familiarity with the religious and political debates roiling the 9th/15th Islamic world, his being in such high demand in the courts of Timurid and Bahmanid realms was likely not merely because of his skill as a poet. On the contrary, there were very “real-world” implications to theoretical examinations of the occult sciences as found in the Miftāḥ and Javāhir. Perhaps Āẕarī being a fixture at some of the most powerful courts of the 9th/15th century Islamic world was not merely due to his ability in the poetic arts, but also his knowledge of the occult.

Zach Winters is a PhD candidate at the University of Chicago, specializing in the study of the occult sciences in the Persianate world in the 8th-9th/14th-15th centuries. Specifically, his dissertation is focused on the life and times of Shaykh Āẕarī Isfarāyinī, a poet, Ṣūfī, and occultist who served at courts from Tabrīz to Bīdar. The project will build from the specific case of Āẕarī to explore the broader intellectual networks of which he was connected, including the radical, messianic Ḥurūfiyya movement. Other major areas of interest include the Ḥurūfiyya movement of Fażl Allāh Astarābādī and its spread throughout the Islamic world in the late 14th and early 15th centuries; the occult sciences in the Timurid period; the history of the Muslim sultanates of the Deccan; theories of empire in the 15th-century Islamic world; and other messianic movements of the Persianate world in the post-Mongol period, such as the Musha‘sha‘id movement. Zach wrote his MA thesis on the early period of the Musha‘sha‘ids and the teachings of their founder, Sayyid Muḥammad ibn Falāḥ al-Musha‘sha‘.